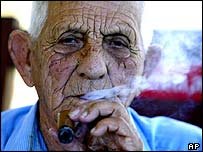 Cuba's high number of centenarians say their longevity is down to laying off alcohol, but indulging in coffee, cigars and sex.

The findings are the result of a study that looked into the lives of 54 out of the more than 100 centenarians who live in Villa Clara province.

The results of the study were reported to the National Geriatrics and Social Work workshop in town, the newspaper Juventud Rebelde said.

In the study, the lives of the centenarians were found to be disciplined, but not austere.

None was alcoholic, and they said they loved coffee and cigars, which they consumed in large quantity.

They had a healthy interest in a number of areas, including sex, said Dr Nancy Nepomuceno, who carried out the study.

Most of the centenarians were mentally alert, had a good lifestyle and did manual labour in rural areas.

The life expectancy in is 76, but in Villa Clara province, where the study was carried out, it is 78.